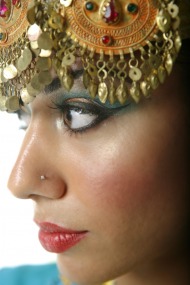 The daughter of a dancer, Tara Pandeya has gained world renown as a dance performer, teacher and choreographer, as well as a scholar and cultural activist dedicated to the promotion of dance forms from Central Asia.
Tara was exposed to dance and music since infancy; she trained in multiple dance styles including classical South and North Indian, traditional Middle Eastern, Central Asian, modern, tap and ethno-contemporary.  Tara’s greatest dance mentors include Zaragol Iskandarova, Katarina  Burda, Charya Burt, Antonia Minnecola, Farohat Saidova, Bea Blum, Katherine Kunhiraman and her mother, Barbara Framm.

She has danced as a principle for Cirque du Soleil and consistently danced as one of the youngest company members and soloists with companies such as Wan Chao-Chang Dance Company, Ballet Afsaneh (of which she was a soloist with for 13 years), the Bea’s Knees, Aywah! Ethnic Dance Company and Kalanjali Dances of India.
Tara worked as a principal dancer with Cirque du Soleil for 4.5 years and is the first westerner to perform with Lola, the National Ensemble of Tajikistan. Tara has performed & created dance programing in over 35 countries.She balances her work as a practitioner with theoretical work, conducting dance research  through the Rockefeller Foundation & CECArtslink in Russia, Tajikistan, Uzbekistan, East Turkestan, Pakistan and India.. Most recently, she has created original dance works for UNESCO, the Bauhaus Festival & at Royal Albert Hall. Tara holds an MA in Dance Anthropology from London’s Roehampton University and is a 2019-20 Fulbright Scholar. Her solo work has been featured on BBC, in the New York Times and in Dance Magazine.

Tara is dedicated to taking an in-depth approach to traditional dance. She has completed dance residencies in Uzbekistan, Tajikistan, Uyghur Autonomous Xinjiang, China, Pakistan and India. Tara has conducted anthropological dance research in these regions both through the Tajik Dance Initiative NGO, of which she was a founding participant in 2006, and independently with dance scholars and traditional artists in the field.  In 2015, Tara won 1st place for a nationally televised dance competition in Tajikistan and was admitted as the first westerner to ever perform with the Tajik National Ensemble from 2015-2016. Tara holds a Bachelor’s degree in Liberal Arts with a Minor in Arabic from Saint Mary's College LEAP (Liberal Education for Arts Professionals) Program.


She has been commissioned for her solo work as well as group choreography in Tajikistan by UNESCO in 2016 to create a cross-cultural piece with the Shahidi Foundation and the National Opera of Tajikistan, a four  time choreographic commissioned soloist with the SF Ethnic Dance Festival,  a Tajik dance piece in collaboration with the British Ambassador to Tajikistan for Shakespeare’s 400th birthday and a German fairytale dance suite for the Germany Embassy in Tajikistan, told through classical Shashmakom dance, a solo commission at Berlin's 100 year Bauhaus Festival and a several collaborations with Billy Chang through the Taipei and Taichung National Theaters in Taiwan..  Other concerts of note include a performance at the Goldman Environmental Awards at the San Francisco Opera House, for Yo Yo Ma’s Silk Road project at UC Berkeley, Royal Albert Hall for Refugee Week, the Albert and Victoria Museum with the Silk Road Collective for Nowruz and the British Library.
Tara worked for 10 years in the Bay Area public school districts for K-High School as a freelance arts educator, teaching and creating new curriculum such as 'Geography of the Silk Road Explored through Dance', in partnership with the arts education programs Youth In Arts, Young Imaginations and a tour with World Arts West.

In 2017,  she was selected by the Forecast Forum for funding to produce a one-woman performance that will premiere in October, 2007 at the Haus der Kulturen der Welt (The House of the Cultures of the World) in Berlin, Germany. Tara was awarded an individual artist grant from the Rockefeller’s Asian Cultural Council for a cross-cultural dance project in Pakistan in 2017, a Next Generation Grant through the California Arts Council, an Apprenticeship Fellowship from The Alliance for California Traditional Arts to transcribe Uzbek doyra drum rhythms for dance, a Margaret Jenkin's Chime Choreography Mentorship Fellowship to work with Cambodian master artist Charya Burt and to create her own solo work titled ‘Finding Center’ which premiered at West Wave Festival and Jenkin’s Dance Lab in 2010. She was nominated for ‘Most Outstanding Individual Performance’ of the year by the Isadora Duncan Dance Awards, given an Individual Artist Grant to work in East Turkestan through the Marin Arts Council, and was selected as a guest artist for two separate 2010 Creative Work Fund projects for ethno-contemporary dance with Wan Chao Chang Dance Company and Gamelan Sekar Jaya, and Kathak dance for Antonia Minnecola with Ballet Afsaneh Dance Company.
In 2009, Tara co-founded the organization East West Centerpoint that was initially fiscally sponsored by Dancer's Group non-profit with her artistic partner Ostad Abbos Kosimov.  From 2010-2015, Tara played the principle dance role of 'Oceane' (the goddess of water) in Cirque du Soleil's Dralion, for which she performed 1,500 shows on 5 continents in 170 cities. She also acted as the tour’s Dance Captain and Pilates instructor teaching daily classes for injured acrobats and staff alike. She also took on a volunteer position as the tour’s Social Outreach Liaison organizing dance and circus workshops across the globe, for example, with children of AIDs patients in South Africa, with Syrian and Palestinian refugees in Lebanon and for at-risk youth in Caracas and Guatemala City. 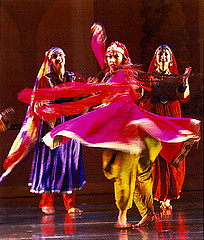